So I just found this series.

I know. I’m so late. But as I do have a huge soft spot of Steampunk that successfully and ‘believably’ adds magic to the lot (See previous review about Gail Carriger’s Etiquette & Espionage)  I wouldn’t resist giving it a go.

The only thing I can truly say is:

The magic system is very interesting, the union of it with machines even more so, the characters are rather simple stereotypes that work BECAUSE the magic and machine ideas and battles are so busy that if they where too complex (in either physical rendering or characterization) it would actually be too much…animes that find a balance in simplicity and presenting ideas are gold…but that’s a post for another day… However, with only twelve episodes I am sorely disappointed that the series couldn’t go in-depth with the obviously, fascinating mythos they where presenting. 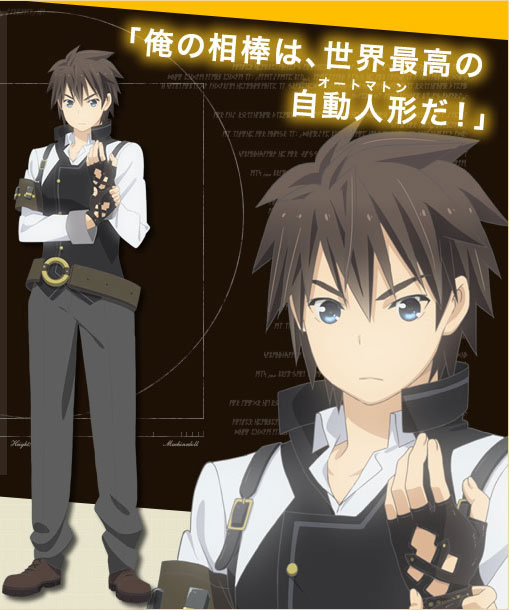 The character designs are clean, detailed without being cluttered and their eyes are just different enough that they are fascinating. They actually attempt to differentiate by coloring that the main character is Japanese verses everyone else (as he is in Britian for this story) and do a good job at it as he becomes unassuming in comparison to the bright colors surrounding him, and that’s perfectly ok. His outfit is cool too, steampunkish but not over kill. His face is a bit babyish for me but he’s in freakin’ high school, smashing outfit aside, that’s just ugh. Have I ever mentioned I LOVE  smart, loyal men in suspenders and vests? I dunno, it’s a personal problem I guess…

Yaya, his doll, is the typical Japanese doll Kimono loli that kicks butt in tall getas. But then she is a machine run on his magic…so….we’re already ignoring reality… This is trivial.  Especially after she gets a pair of combat boots later on…She also seems to have a scary desire to get into her master’s pants…yeah. That was a thing. She also says what’s on her mind completly aware of how dirty they sound.

This is yet another series where the use of computers is superb they every occasionaly switch out the character for a 2-D/ 3-D one and it’s not too jarring. You can still tell, but it’s not enough to break the spell.  But then seeing as there are only twelve episodes, I guess they used it to make beautiful episodes rather than tying to squeeze out more of them. If you like fights and new ideas this is a good one. Just don’t go in looking for a sense of completion at the end. For that you’ll have to look elsewhere, sadly.  This started out as a light novel and I would LOVE to read those. However I have found no translations.

*looks down in dejection.*

However if someone knows where to find them I would gladly gobble them up. Hit me up if you have any ideas, for the moment I’ll make myself happy with the twelve episodes and finding the manga adaptation…