I haven’t forgotten about this I swear. Though consistently blogging once a day is sometimes a bit difficult. But I am going to finish this!!

At the moment I have to say that my most epic scene ever (which will probably change every few seasons to be fair)  had to come from Mobile Suit Gundam IRON-BLOODED ORPHANS (機動戦士ガンダム 鉄血のオルフェンズ  Kidō Senshi Gandamu Tekketsu no Orufenzu) .

Specifically episode 19 at the very end.

For me Epic-ness is more than just a awesome fight choreography it also has to do with the featured Character’s reaction about said situation and the way they handle it. And Mikazuki  delivers in the Boss category of Epic-ness for me.

It is a Gundam series so there is lots of epic space fights and political intrigue and archaic (but no less creepy) borderline pedophilia, going on (not even joking…).

But the scene I choose stuck out as a pretty epic. The ever stoic, and I would argue a bit emotionally damaged, main character is in his Gundam entering the earth’s atmosphere. Having watched no few Gundam series myself, this should normally not be a big deal…

Except this Gundam in particular is in mid fight, is caught by the Earth’s gravitational pull and has no heat shielding to make the trip down to Earth even a remote possibility.

Well not a successful one at least.

Mikazuki, manages to defeat his opponent but is left without a safe ride down to the surface as the shuttle he was to hitch a ride down with is too far away  for it to be safe for them to allow him in.

Mikazuki Augus, the whole while is pretty stone cold after the ordeal.

Well no that’s not true, exactly. But his grace under fire is mainly what makes this epic in my book. He knows he’s probably about to die with this suit riding his tail.

So he tells them to go on takes care of the enemy mobile suit then stops.

He has the obligatory flashback and a moment of ‘worry’, (which really translates in to a few sweat drops)…

then the idea and a commentary about how Earth’s gravity is amazing.

annnnd back to being his normal neutral expression.

So what does any bad-A Gundam pilot do?

Much like Kit Cloudkicker rode his airfoil in Disney’s Tailspin.

Heck they’re even both orphans…

~Notices the blank stares of the younger audience. Fights the urge to go check for grey hairs.~

If you don’t know what show that is look it up.

When his teammates have finished entry and look frantically for him, they’re all in various stages of relief after a tense few minutes.

“He really gave us a scare back there.”

“So this is Earth…and that’s a Cresent Moon (Mikazuki).” 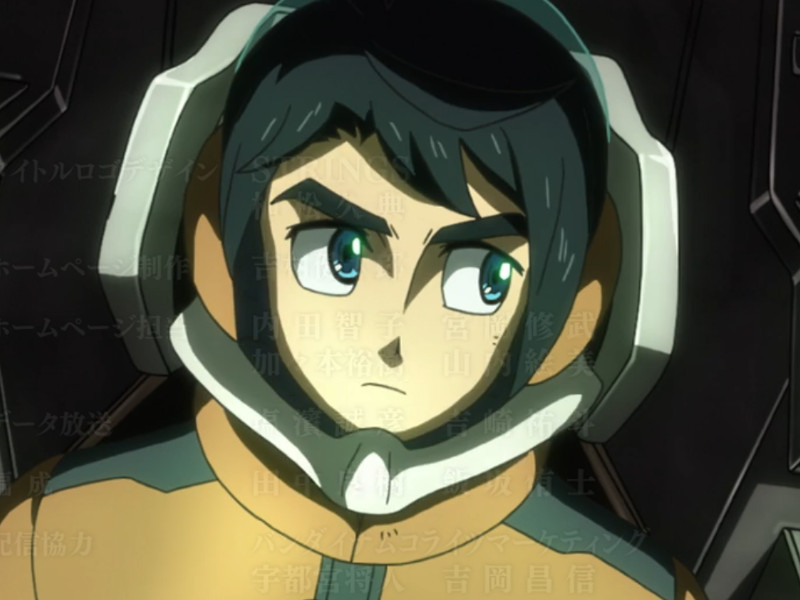 As if he didn’t just fight off the ‘bad guys,’ save his friends, accept his almost fate then reject it only body surf his enemy’s corpse through entry into Earth’s atmosphere.

Ya know. All of that’s just typical in a days work for the hero of the show.