To come clean, I am not a huge fan of Zombie stories.

They perfectly help display the human condition, yes, but as a rule typically they are poorly done or simply an excuse to ride the hype train of a trend as of late. I also typically do not care for them  because often times anime, video games, movies etc. seem to forgo good story telling for blood and gore. Neither of which I’m a fan of. If excessive amounts of gore is present for me I start to pick apart the story even more because usually a very weak one is hiding behind it. Tack on they are often no-win stories I usually get tired of it quickly as I simply don’t have the mental capacity to root for anyone or any situation that’s intentionally written to fail. Do things always have a happy ending? No. Do you have to grind it in my face every episode and have a new trauma as I watch someone else I sort of cared about die horribly for the sake of shock factor and ‘realism’?  When I discover that the writer kills whoever on a whim for effect after building them up I have other things to do with my time.

Koutetsujou no Kabaneri however is an exception for me. 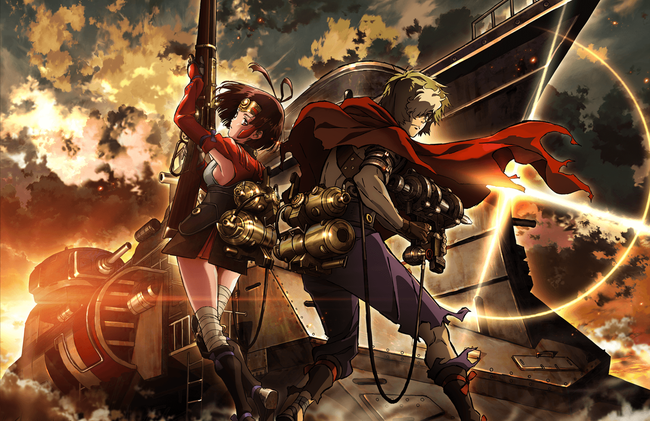 For one they do not use careless death of important characters to prove how harsh this reality is. They DO show you deaths and ones that are horrible and, perhaps, shouldn’t have happened. But by an large your main characters are fighting tooth and nail, getting hurt and broken emotionally and mentally but you can still root for them because they are still living (for the moment at least) and doing a dang creative job about it too.

I love the Steampunk aesthetic and concept.  Well done steam machines? Lovely art? Enough mystery to keep me coming back for more? Enough tragedy without feeling like overkill?

Add a Japanese flavor of fashion and Bushido? Yes please.

Unfortunately I cannot have that with this series (yet).  So I am forced to watch it as it comes out with everyone else.

Then there is compelling and succinct story telling. Well placed hints with in fairly stable writing (There are somethings that are kind of unclear however they are minor and I can overlook them easily). No episode is actually seen as ‘wasted’ (so far) and you are so absorbed in the story that when it’s over there’s that little kid feeling of “awww but I want to know more.”

And Ikoma…our main hero. He’s one of the most hardcore nerds I have ever had the pleasure of watching in an anime. Hardcore not just for his brains either…watch and see. His character design is perfect for who he is as a character and what he does. Just watch the first episode this dude is so awesome. 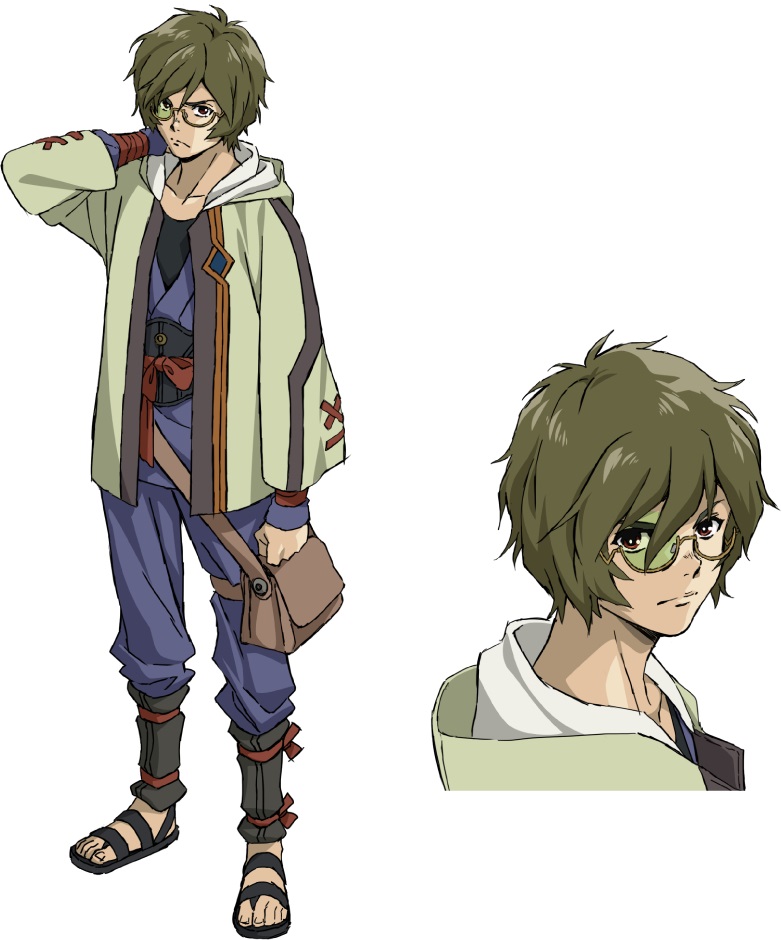 So far it is slated for only 12 episodes. Right now we are up to episode six (half way through) and the characters are all growing without seeming like they are freakishly brilliant. The series does ask you to make some leaps of logic but none that if you think about a bit shouldn’t be too bad.

Did I also mention how beautiful this series looks? You think that illustration up there is a joke?  The WHOLE series (so far) looks just like this.

Fight sequences are visually epic, lighting and color use are wonderful and timely. They evoke the right mood when necessary and not all anime (heck, media in general) can say the same thing.

Character design wise they are using tropes. So for new anime viewers you may be much more surprised by what happens. Some people do not like Tropes I for one do not have any issues with this when done right. I say the same about predictability in a plot. Neither of these are inherently bad things. It’s all about how it’s delivered and WHY. Here the character tropes are there to tell you (if you know what you’re looking at)  who the characters ARE because they really don’t have the episodes to spend on developing them. The story has to be delivered as efficiently as possible and expected character designs are one way of doing so. And also just to be clear there really is NOTHING completely new. It’s always a recycling of old ideas presented in different ways. Thus a Trope is the general base of a idea that’s sometimes used simply for it’s own sake. So…for example…

(WARNING: if you have decent categorizing skills; learning what I’m about to say will almost always give away spoilers to animes/movies/ etc. you’re watching. Using this as a example will give away some spoilers for this specific anime, kind of. If you do not wish to continue stop here with me saying: Go watch it!! It is good! If not and you want to know what I mean by the use of Character Design Tropes please continue. You have been warned…) 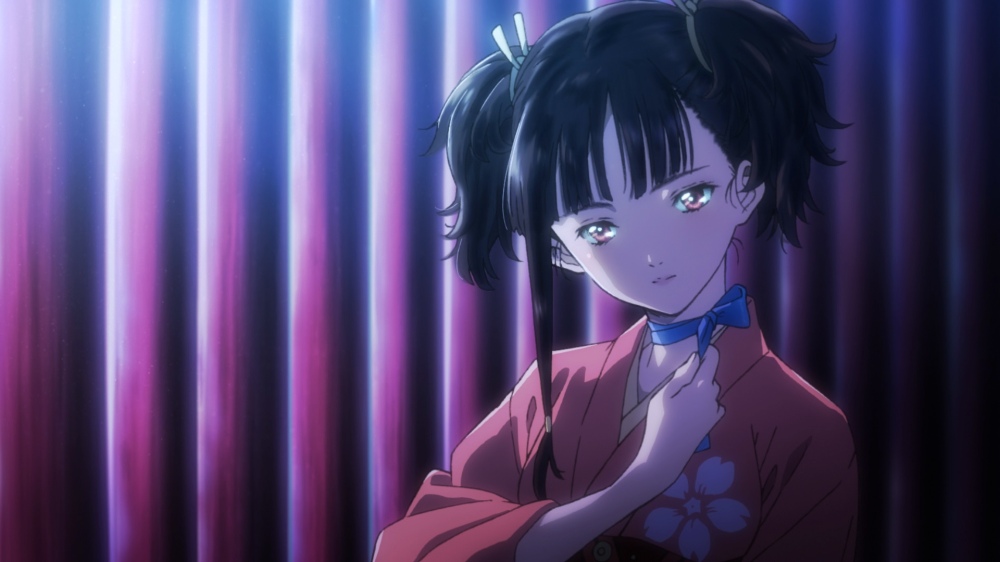 [The only bright spot of color in this image if you need help finding her). 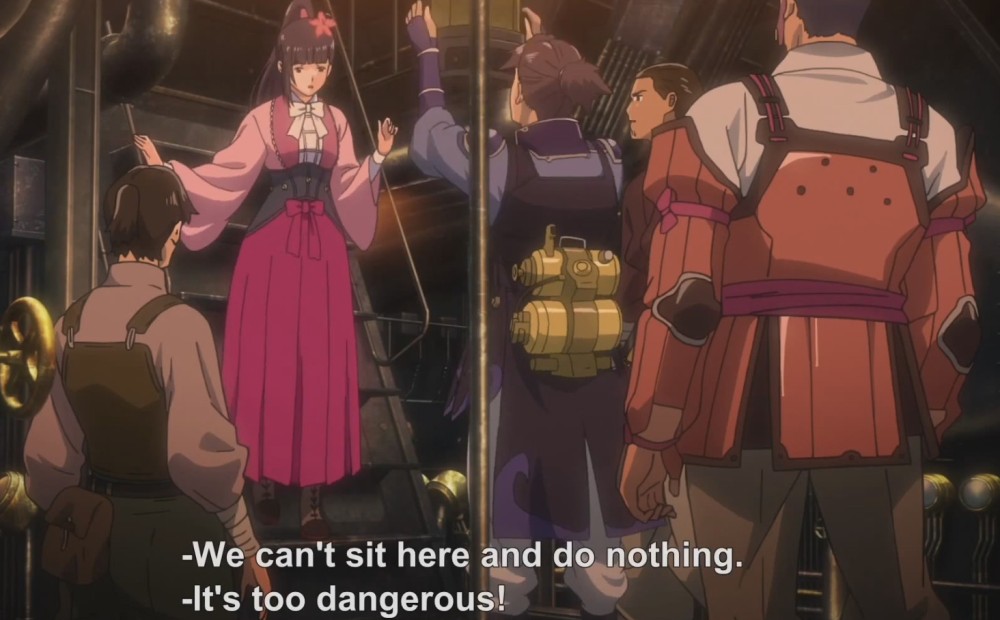 These two are great examples of character design tropes. Character designs can actually span most genres but here they are used almost in the most ‘classical’ sense in the style of anime chosen. When you look at them, and you’ve watched anime a bit, you already know something is special about them and you have a good idea what it is already. Here let me put them with a older examples of these same tropes: 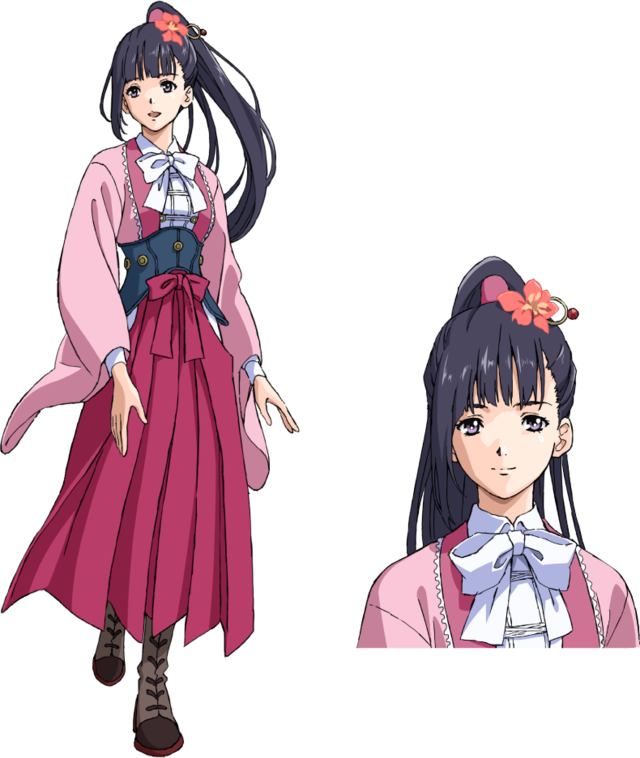 The “Japanese Hime (princess)” character that usually has a kind disposition, a bit naive, but grows (or will grow) in to a strong character and possibly leader if given the chance to learn. Often surprisingly strong but perhaps not the same kind of strength as a physical one. No her’s is typically a strength of character and of honor. Though one should not take her lightly in a fight she isn’t totally helpless. I used these two simply because they looked so similar it was crazy…But this trope doesn’t always retain the same color scheme. It is of also note that Sakura Taisen also occurs in a alternate history run by steam around the same time period judging by their clothes… This is, what I call, the Other wordly/deceptive girl fighter-type. Their usually built like little girls and often act like them. But something about them hints at age or experience far beyond their years. They are often aloof but kind, in their own way, usually very matter of fact (sometimes bordering on abrasive at times). You do not want to mess with them they will kick your @ss if you test them. They do have moments of weakness but somehow they come off as understandable ones rather than convenient. They also tend to have traumatic backgrounds which manifests in their vicious fighting style. They childishness is just a front and often birthed from their desire to have the childhood that was somehow taken from them. This trope often comes with big male in tow who’s sort of just for show: 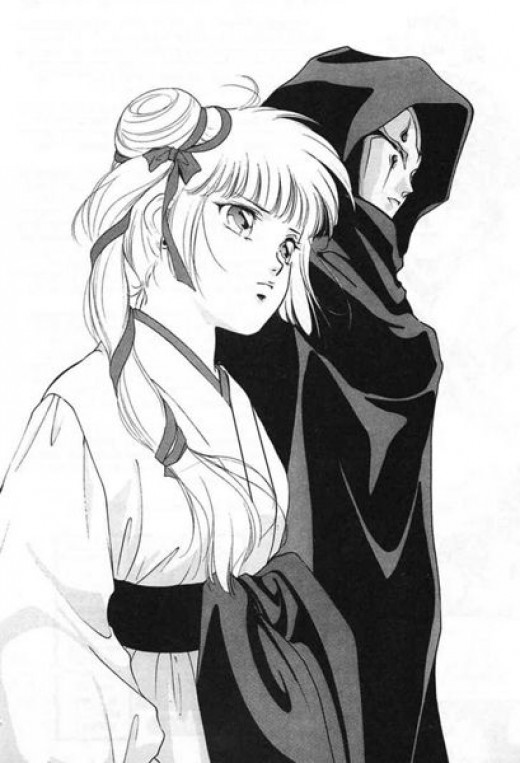 Miyu is a early example from a Gothic style Japanese horror so the trope for her was in it’s solidifying stages. Somethings for her don’t fit quite so well but she’s one of the earliest examples I can think of. If you lovely readers can think of more feel free to sound off.

Again two tropes that people who watch anime regularly pick up. Again it is used in this anime to great effect because you NEED to be able to read all the characters at a glance. With only twelve episodes and tight story telling you don’t have the luxury to spell everything out. The writers need you to jump to some conclusions and  quickly. The characters are often a bit predictable because based on who they are it just makes sense.

This is a generality, yes, that’s what a trope is. And often writers/ manga artists will play on them to surprise you. In this case it’s used for expediting a story. Yet another reason why I’m in love with this anime. Tropes weren’t used just to be lazy they where used intentionally in a way that hearkens back but still feels like their own. There are many more things I could prattle on about concerning this anime outside of this subject but I would much rather you go watch it yourself dear reader and find out what about it you like or maybe even dislike.

Think Tropes should never be used? Hate the anime? It’s all fine let me know what you think in the comments.