So…even though I haven’t mentioned it in a long while, I am engaged to be married. And with all that excitement comes the planning and preparation. I haven’t forgotten about it It’s just slow going at the moment. *sighs*

It’s not nearly as stressful (so far) as people profess but then as stated earlier several times, I wasn’t attempting to go traditional at all. For many reasons as stated here. Mainly because as soon as something is labeled “Wedding” or “Bridal” it skyrockets in price and frankly going the nontraditional route can be more reasonable because it lacks that name. So when it comes to make up and hair, obviously, I’m not likely to head out to attempt to get a beautician to do anything.

First I am a African American woman with hair in it’s natural state. 95% of beauticians out there do NOT know how to work with it without hurting it (no matter what they say) and  I don’t like fake nails and the damage they do to your natural nail. Tack on most nail places have forgotten how to do natural nails and treats them very poorly.  So choosing hairstyles and what top do with my nails was on my to do list very early as going somewhere kind of isn’t a option. Both are icing on the cake and people often underestimate how such things effect the finished product.

Any who that led me to looking at options that I could do myself that didn’t take too long but would last a decent amount of time. I found this set a bout a year ago but didn’t purchase it because at that point it was $50. I did not wish to spend that amount of money on a experiment. Then out of the blue I was poking around the web about three weeks ago and found out that that exact same set was on sale for half off! 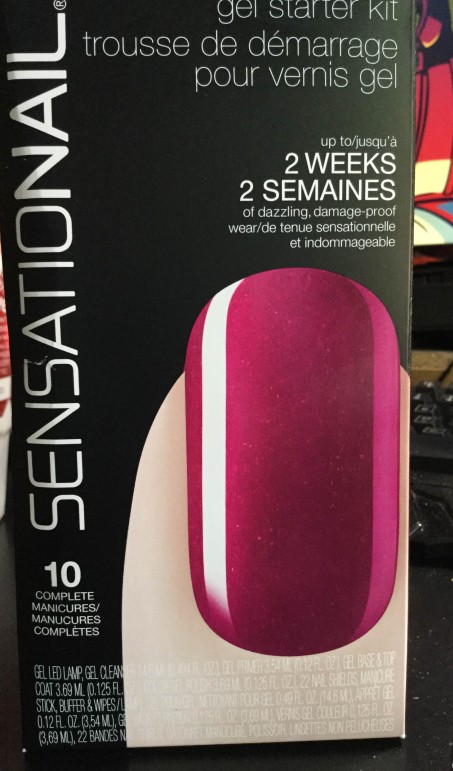 It comes pre-packaged with a LED lamp and all the supplies for ten complete manicures. It is gel so I needed no acrylics attached. The box also has included a quick guide in the form of a card so you don’t have to unfold directions while doing your nails. 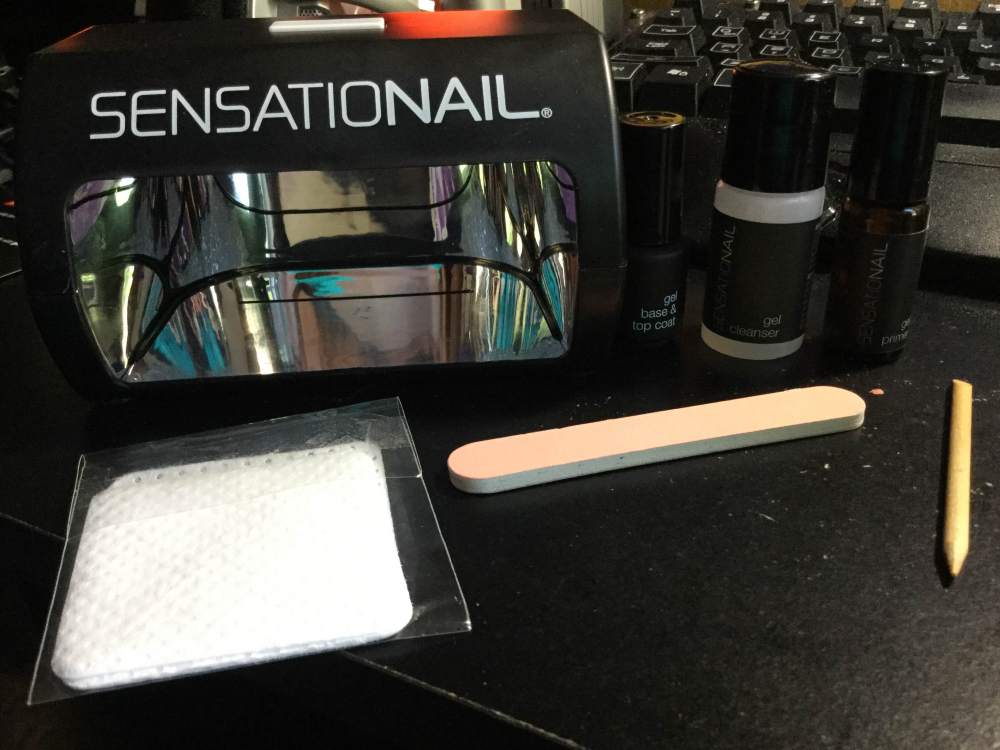 I got the kit and a few other items since I saved so much on the kit. I got a french set the a coating to make the nails appear matte, and a gel converter.  I had stopped painting my nails in college due to lack of time and frankly I got tired of them chipping so my polish supplies are very low but I was excited so I splurged a bit. I sat at my computer desk to do my nails. Well because I was watching anime and YouTube at the same time. I took the time to shape my nails first (very important to the final look). So I took a bit longer than expected.

BTW If you are filing natural nails go in ONE direction. That sawing motion only works on fake nails. If you saw your natural nail you will rip it up. One direction each way. So up and over on the right and up and over on the left side of each nail gently until you reach your desired shape. If you have extensions you may saw until your heart is content. And yes the grit size of your file matters. It’s like sandpaper. Bigger the grit the more it shaves away the rougher the edge, the smaller, the less it shaves but you’ll get a smoother edge. Get this and your nails will thank you. 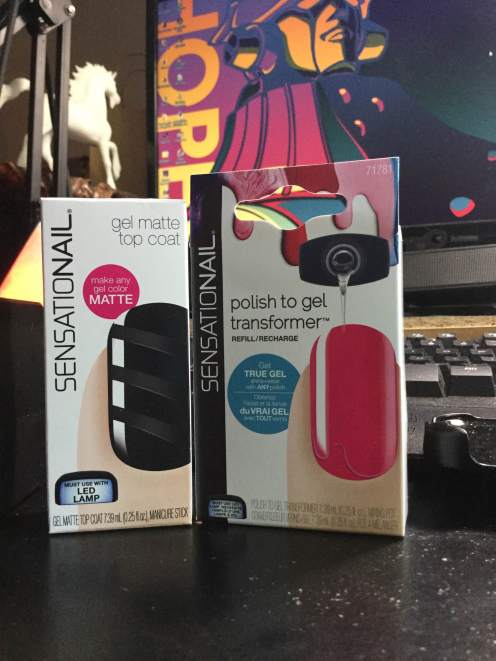 Best part is the gel sets in 60 seconds!!! 30 seconds if you just want clear.

The included lamp beeps at 30 seconds and shuts off at 60. I only needed to apply in the steps described and shove my fingers into the bay of the machine and press the white button at the top each time they told me too.

The kit came with all you needed for the color shown on the box. There are about three or four different kits each with different colors. This one was Raspberry Wine, though they also offer the kit in Coral Sunset, French in Sheer Pink, Pink Chiffon,  Scarlet Red, and a slightly cheaper one that is packaged with a gel converter (which makes any polish you own a gel polish!). The gel polish does run about 5-12 bucks a bottle however if you compare that to a salon visit it doesn’t look so bad. Also keep in mind that you could use any gel polish with this so long as the polish needs to be set with a light.

I mean I was able to do my nails and immediately start typing and get back on Battleborn without any wait time. And I’m almost convinced that my score was higher because of my fab nails.

Do you know how cool that is???

Well… maybe some of my gentlemen readers (if they’ve even made it this far if you have I salute you sir!) may not.

But trust me it’s really neat.

Best thing is they last for about two weeks (when done properly). Let me tell you. I put my nails through the wringer. I type, I game, I wash dishes, I cook, I scratch cats, check under the hood of my car…the list goes on. But sure enough they lasted a good two weeks no chips. Even with my botched first attempt (which I did not photograph. They looked HORRIBLE thick and ugly…) they did last the two promised weeks.. BTW the “Gel cleanser” they give you is simply rubbing alcohol so save your money and pick up a bottle of that to save yourself time. Here are some more images of the process my second time around and the finished product. I went with the french this time. I loved how they turned out!

It’s also pretty nifty that under the LED light the gel polish glows so it’s really easy to see if I missed sections or not. Very handy when working with sheers and clear. When applying gel you should use very thin coats. The stuff is thick and easy to move about but it builds fast and pools easily. So It took a practice run to get the hang of it. But in that same vein it allowed for a better control of application once you are aware of this.

The French had to be modified for me a bit due to my skin tone. The pink chiffon would’ve been TOO pink if I put two coats on. I have melanin in my skin (quite a bit of it) so that ‘flesh toned’ color (which is what a French manicure is supposed to be) would’ve looked just a bit too off against my skin. When I briefly went to a nail salon, many moons ago, I was introduced to the “American” manicure with creates a more natural look with a pinkish but darker flesh tone polish underneath. By applying one coat I was able to roughly duplicate that look on my own.

Technically you’ll see that with the French manicure kit they gave you stickers to get that perfect tip.

I found it a hassle. I used the included white gel polish to free hand it. It is a bit bumpy but I didn’t want perfection. I wanted something nice but organic. It looked like a really nice…nail.

To remove the nails you must rough up the surface of the gel with a rough file (take care not to go down to your nail) and then submerge the nails in Acetone for about 15 mins and use a orange stick to push it off. You can also find a foil method but I found this WAY too difficult and more time consuming than needed. I like doing girly things on occasion but if it promises too much effort/time I quickly find a more efficient route or don’t bother. Since PURE Acetone may work faster but kills your hands I used Acetone. It’s ‘watered down’ acetone but it saves my fingers. Besides Pure Acetone is really for those who have fakes and need those removed as well.

I’m getting the hang of this kit and now I have no worries about being able to have nice nails for my wedding for the price of a bottle of polish. In fact I recently re-did my nails because I had so much fun this time I used Island Oasis and the matte coating for a more daring look. I rather like it:

If you like having your nails look salon quality and would like to do so on a reasonable budget this is certainly the way to go. Yes it might take you a few practices. But if you stick to clear or sheer colors for those practices people won’t notice and you can refine your technique without too many witnesses.

The kit I later realized was being ‘cleared out’ because they are rolling out a new series and a brighter better lamp that sets your nails even faster. We’re talking about 10 seconds with color…so…yeah. Kinda bummed about that but I’m so excited that I can do this and that it lasts. And the converter is the best thing EVER. I can Take any nail polish and use it like my gel polish. So I’m not tossing what I already have. If you are tired of paying salon prices but really like having fab nails I highly recommend this kit.

Now…to find a nice gold to match my dress….