So… I’ve been on about a year long journey into the realm of P.C. gaming. Now from a very early age I was a gamer but mainly on the areas of consoles (Nintendo and SEGA baby!). However, it would be wrong to state that I never played a game on P.C. before…but it was mainly Roller-coaster tycoon, Prince of Persia, and Cat simulators. Oddly, though I am not a stranger to computers in the least. I learned to build one in middle school and being the daughter of  mother who’s degree was in Computer information systems and having a Aunt who was a Master Console Analyst for the firing rooms at NASA (back when the shuttle was in it’s heyday) computers are not a strange creature to me. In fact I understand them better than most.

But with my life being as busy as it was console life was simply easier in the long run for easy accessibility and implementation of my limited free time.  It was also the ‘safer’ option to my mother who was busy and didn’t want me playing too many violent games. She was very picky about what she allowed me to see…I had/have a very active imagination. So it was easy to give me the cutesy hell of Aladdin and Lion King than to chance up and give me Doom. (*looks over at her present collection of Boarderlands, Resident Evil (s), Bioshock, Saints Row, and Dishonored* yeah…’bout that..)

Which wasn’t fair…Auntie got to play it…and now she has that gaming cred that I don’t. Going backwards to play is hard sometimes. 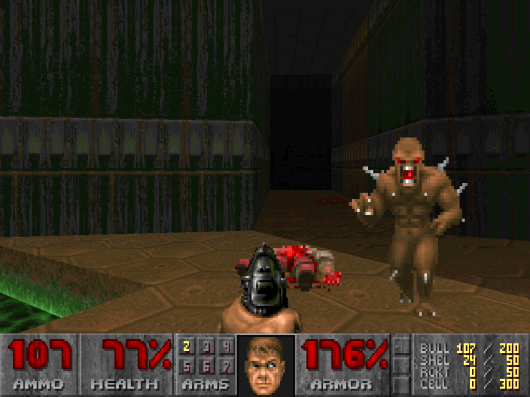 So about last year I was gifted with a very basic gaming computer. I was able to play some of the more basic games from the past. Well not that far back but basic games of the modern era. Getting the muscle memory down for this new means of control still messes me up from time to time. That W,A,S,D and selecting weapons with mouse wheel or (worst yet) 1,2,3, etc.

I intentionally went back to a game that I loved on the console and repurchased it on steam for a whopping $5.00. Saints Row IV  Portal 2,  and used that and Minecraft to help program my muscles and mind for this new way of gaming. So I got kind of comfortable and decided that it was time to purchase a big name game.

Now those of you in the know know that when I said a basic PC it didn’t mean it could handle something even close to that caliber. However, I needed a new laptop and got a nice one that happened to have a Nividia G.P.U built in and space for expansion if desired.

I can hear the purists having a fit. “Never get a gaming laptop!!” is being chanted at the screen. And really I didn’t get a ‘gaming’ laptop. I compared laptops of similar builds that had what I wanted on it and found that this one was not only cheaper…but also had a gpu unlike the others that only had whatever was on-board. So this was a purchase for business that just happens to have the nice perk of running Mass Effect Andromeda on medium settings.  Any who… I enjoy my pc gaming for the variety and indie options available and the options of upgrading and growing with the demands of games.  In fact that basic gaming rig has been upgraded once and I now have a detailed plan for a new set up I’ve dubbed “Moonlight Sonata.” I already have the case for it and the fans. Now just to get *everything* else.

But…I’m not ready to give up on my Ps4 and Wii U/Switch just yet. There is the added perk of usually not having to optimize anything, it’s essentially stick it in and play. This is not always the case with PC titles (I do realize that now some games are porting horribly to console as of late but as a general rule this typically doesn’t happen). And there are still some console exclusives that I would miss horribly if I completely abandoned them. There is also something just a bit nostalgic for me about starting up a console and grabbing my controller before plopping onto the bed to binge a JRPG or similar. Sometimes the perk of ‘plug and play’ is unbeatable. They are also easier to take around when traveling to family members houses and the like while on vacation. my Rig even in it’s un-updated form is a bit too cumbersome to take with me what with dual monitors and the like.

I can’t say that I’ve become an elitist. Consoles are limited by hardware as they are not nearly as up-gradable and games that come out later are often forced into fitting into the specs that might be more than a few years old (thus the need for ‘newer’ versions of  the game systems) in order for it to work. So no they may not look the prettiest. But I’m a gamer that loves games for the stories and unique game-play. “Pretty” can only hold me but so long before I get irritated that that’s all a game is offering me.

Like a beautiful cake that tastes like a reject from the Hostess factory. If a Ding-Dong that looks like a miss-shapen hocky puck tastes better than the beauty you have presented to me you shall be shunned from my plate and gaming devices until production improves.

But for some, I’m sure the opposite is true in terms of comfort and nostalgia. For them it’s fond memories of curling up in a chair in front of the keyboard and mouse that illicit such fond memories. Its curious that both give me fond memories but only one gives me that sense of nostalgia I often crave in the act of gaming (frame rates be darned!).

What about you dear reader? If you are a gamer what system do you indulge on and why? Is it for that feeling of nostalgia or to play the newest games at max settings?